Education has always played a vital role in Moravian life, and did you know that the Moravians founded the oldest, independent boarding and day school for girls in the United States? In 1746, not far from Nazareth and Bethlehem in the British colony of Pennsylvania, the Moravian settlement of Lititz founded their Gemeinhaus for learning, worshipping, and meeting. In a mere 20 years they had 70 eager Moravian students, enough to expand the school into a boys’ school and a girls’ school. Nearly three centuries later that same all-girls school, known today as Linden Hall as a nod to the graceful linden trees planted in 1838, proudly stands on Moravian Church Square and continues to offer an extraordinary education grounded in Moravian values.

The school’s founding was based in a progressive philosophy encompassing three fundamental principles: first, that all young women be well educated (as thoroughly as men!) to become whole, responsible citizens; second, that pupils must develop a love of knowledge to reach their full potential; and third, that advanced students should serve as role models for younger students. Linden Hall’s narrative spans several historical eras and reflects many of the significant movements in the education of young women. These original principles have not only anchored Linden Hall but have also guided the school to meet the ever-changing challenges of the modern world.

Ornamental needlework was a hallmark of the student experience in the early years. The school, by then known as Lititz Seminary, believed that women should be self-sufficient and should contribute to the community. Linden Hall students were famous for creating beautiful needlework at the highest level, and these early pieces are highly sought after by collectors. Linden Hall alumnae are committed to bringing many of these prized pieces home to campus, and the School lovingly cares for a collection of handcrafts from its history. The earliest piece in the collection, from 1776, depicts a goat meticulously stitched in satin on a background of rich silk. A recent acquisition is also on silk, and within an elegantly crafted floral wreath is embroidered the name and date of the artist: Anna Maria Trautwine/Lititz Seminary/August 10, 1835. In an extraordinary twist of luck, the school’s handwritten financial records from that era note a school store purchase by Miss Trautwine totaling $3.23 for silk, threads, pins, ribbon, and other supplies to create this masterpiece.

The school’s slowly expanding influence is reflected in church diaries throughout the 18th century, and in 1794, the Moravians generously opened the doors of their institution to non-Moravians. A sprightly 6-year-old girl from Baltimore, aptly named Peggy Marvel, was Linden Hall’s first non-Moravian student. The Moravians continued to develop and adapt their remarkable school by adding the soaring Mary Dixon Memorial Chapel in 1883, a nationally ranked equestrian program in 1925, and a groundbreaking aviation program in 2014 offering young women the chance to literally soar to new heights. Linden Hall students benefit from an academically rigorous STEM program, robust arts offerings, globally focused humanities classes, and electives in everything from economics, to anatomy, to philosophy. More than 20 Advanced Placement classes challenge young women intellectually, and colleges and universities from around the world seek out Linden Hall students for their curiosity, compassion, academic excellence, and commitment to serving others.

Today, students of all faiths and creeds come to Linden Hall for an enriching college preparatory education from homes as far-flung as Wisconsin, New York, Nevada, Massachusetts, Dominica, Vietnam, Germany, Rwanda, Korea, and from where it all began, right here in Lancaster County, PA. The school, situated on 49 acres, now operates independently of the Church, but prides itself on the original tenets of the Moravian educational philosophy of caring for the whole girl – intellectually, emotionally, physically, socially, and spiritually. The Linden Hall experience is formulated for girls in grades 6-12 to build leadership skills, foster critical and independent thinking, encourage a love for learning, and, most of all, empower girls to excel.  Linden Hall is eternally grateful to its Moravian founders who created this unprecedented, remarkable community. 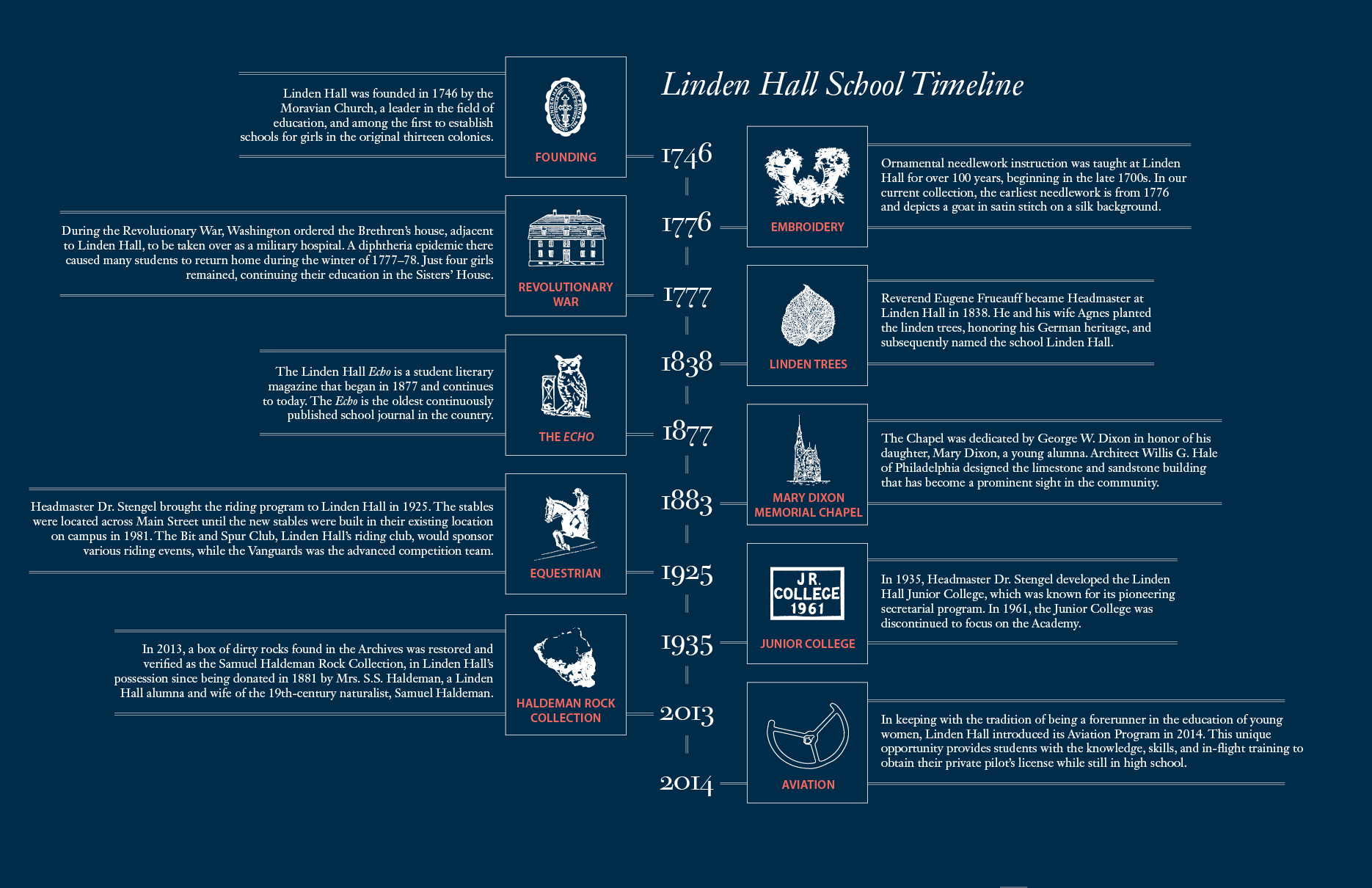 Continue learning about the history of Linden Hall

Learn more about the Sports and Riding programs offered at Linden Hall.